We've Tailored Our Services
Especially for You

Outstanding service is what we pride ourselves on at Brother’s Garage Door. We specialize in the highest quality garage door sales, installation, and repairs. We now offer online booking and payment of invoices to help with social distancing during these trying times and COVID-19.

With over forty years of experience servicing Milwaukee, Waukesha, Ozaukee, and Washington Counties and our dedication to our customers, we can confidently find an excellent garage door solution to meet your needs.

Services that we supply:

Brothers Garage Door guarantees professional and reliable service as well as the most reasonable rates available in this industry.

Have a question? Is there something specific you would like to include in your garage door installation, update or repair?

It all began with Grandfather Peter Blankenheim in the mid-1940s, and his friendship with Joe Wilde, Sr. The two men met while working at The Convertible Door Co. in Milwaukee–a millwork shop that produced entry doors, folding doors, and swing-out garage doors. From there, they moved on to work with Crawford Overhead Garage Door Co. and began learning about garage door servicing and installation.

In the mid-1950s, Peter and Joe formed a partnership by opening a Crawford Garage Door franchise together, which eventually became The Joe Wilde Co. In 1956, they moved to a location at 84th and Greenfield Avenue in West Allis, where they served the greater Milwaukee area for many years.

As the old saying goes, apples do not fall far from the tree, and so it was that Peter’s son Ray Blankenheim joined The Joe Wilde Co., as did his friend Don Wilde–Joe’s son. Eventually, the sons found their niche as salesmen.

In 1976, Peter retired from the Joe Wilde Co., and it was at this point that Ray decided it was time to expand his world and start his very own garage door business. With the help of his father, Bishop Door Sales Co. opened their doors that fall, in the New Berlin Industrial Park. They specialized in the sales and service of residential and commercial garage doors and door openers. The first to join the team was his wife, Jo, and daughter, Karen.

During his time as a small business owner in the garage door industry, Ray served as president for the Door and Operator Dealers Assoc. (DODA), and the Master Builders Association. He was also a member of the Knights of Columbus.

After Ray’s death in 1996, his children Robert, Brian, and Karen continued to operate the business with pride and dedication in the four-county area that is Waukesha, Washington, Dodge, and Milwaukee.

Now, as Brother’s Garage Door Sales and Service LLC., we look forward to serving all of your garage door needs, presently and in the future. 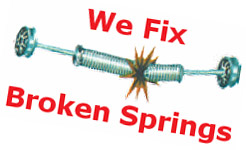